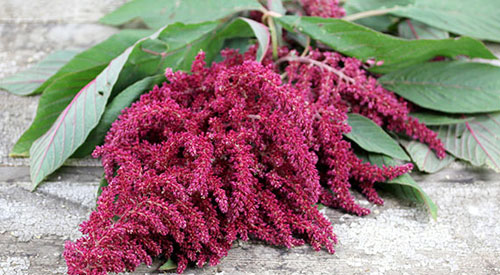 Amaranth is a plant of many uses.

Technically the seeds are not grains, like wheat or rice. However amaranth seeds are often called a “pseudo-cereal” because they contain a range of nutrients similar to that of cereal grains.

Known to the Aztecs as huauhtli, amaranth is thought to have represented up to 80% of their caloric consumption before the Spanish conquest. Another important use of amaranth throughout Mesoamerica in the preparation of ritual drinks and foods. To this day, amaranth grains are toasted like popcorn and mixed with honey, molasses or chocolate to make a treat called alegría, meaning “joy” in Spanish. [Source: Wikipedia]

Amaranth leaves and stems are eaten all over the world steamed, boiled, stir-fried, in salads and and in soups.

With all these characteristics in favour of amaranth, is it recommended for people with Histamine Intolerance? Not really.

Amaranth in itself is not high in histamine, but it is high in oxalates [1], and oxalates are histamine liberators. One study was optimistic nonetheless, concluding that “Grain amaranth can be considered a high oxalate source, however, as most is in insoluble form, and due to its high calcium and magnesium concentrations, oxalate absorbability could be low. This should be confirmed by bioavailability studies.” [ibid.]

Another study showed that oxalates in vegetable amaranth were “high when compared with the amounts reported to be a health hazard in other vegetables and forage crops.” [2]

Other drawbacks of amaranth

In conclusion  – amaranth is a good source of complete protein, and it is gluten-free, but if you are histamine intolerant you should think carefully about consuming it and treat it with caution! If your symptoms are severe you might be wise to avoid amaranth and instead stick to foods listed in the ‘Strictly Low Histamine Diet‘.