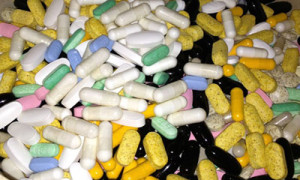 Many common over-the-counter and prescription medications can increase the levels of histamine in our bodies.  Recently we received the following email from a reader of “Is Food Making You Sick?”. The writer has given us permission to publish the letter on this website, as it contains information that may be helpful to others.

“Like many other people I have been suffering (for a long time) from a range of symptoms that caused me great distress and seemed to have no real medical answer. Eczema so bad that the skin on my hands was literally falling off, in spite of daily application of moisturizers, urea creams and cortisone creams. Night-time gastric reflux so bad that I would wake in distress with acid crawling up from my stomach into my throat, burning all the way, eroding my teeth and esophagus and setting the stage for future  health problems that could be even more serious. Early morning stomach cramps so agonizing I felt like screaming. General fatigue to the point of chronic exhaustion.

“Shortly  before these symptoms appeared, I started taking anti-depressants and anti-anxiety meds to help me cope with a traumatic event that had occurred in my family. I was also on ibuprofen, alternating with celecoxib, (NSAIDs) for back pain and knee problems.

“The gastroenterologist I consulted about the acid reflux gave me an upper gastrointestinal (UGI) endoscopy and then put me on ‘proton pump inhibitors’, which I was told I would have to remain on for the rest of my life.

“I was on the PPIs for years. Then I found out that the side-effects of taking PPIs long-term include increased susceptibility to intestinal infection and increased risk of bone fractures. That’s bone fractures of any part of the body – legs, arms, hips, spine…  We all know that as people age, if they break a bone it can mean the beginning of the end…   My future looked bleak, and to top it off, the PPIs were not having much effect on the gastric reflux. I was still suffering nightly stomach pain, though it was not quite as bad.

“Thank goodness for the Internet. In my desperation to find healing, I was searching health forums high and low and I found out about histamine intolerance. I immediately started following the low-histamine diet as described in “Is Food Making You Sick?”. I would do anything to get better, so it was worth a try. I managed to stop drinking alcohol every night (I had been self-medicating with it). The desire to escape nightly pain is what drove me and gave me the strength.

“I have to admit, I did not pay full attention to the list of histamine-provoking medications in the book. I concentrated mainly on the diet and supplements.

“Also, under my GP’s supervision, I came off the anti-depressants. It had dawned on me that they could mess with my histamine levels, so I substituted mediation and counseling for the drugs (it took several tries to find a counselor who actually gave me coping strategies instead of just nodding and saying, ‘and how did you feel about that?’, but that’s another story).  I kept taking the benzodiazepine anti-anxiety pills, however.

“The first thing I noticed after starting the low-histamine diet was that my eczema, which I’d had for almost 10 years, started to disappear within days. This was great! However I still had the painful nightly reflux. Determined to get off PPIs I started taking antihistamines instead. I took Zantac, whose generic name is ranitidine. I took one every night before bed and was pain free all night, and able to ditch the PPIs. Hooray! I thought, I am off PPIs forever!  – until I read on the Zantac packet that you are not supposed to take it for more than 14 days.

“I now knew that antihistamines could banish my acid reflux. Since I was on the low-histamine diet, I decided to ditch the Zantac. Bad move. The acid and pain returned. But WHY?

“Back to Doctor Google…. I looked up the side-effects of ranitidine… and found out that if you take it long-term, it has a rebound effect when you stop. So I thought, okay, I will counteract the rebound effect of ranitidine with Mylanta, Rennies and every other antacid known to man until the effect wears off. So I tried that and it didn’t work… Finally it dawned on me (duh!) – what if some of the other meds I am using are messing with my histamine levels and bringing on acid reflux?

“I had come off my histamine-raising anti-depressant, anti-reflux and antihistamine (ironic isn’t it?) meds, but I was still on NSAIDs and benzodiazepine anti-anxiety pills. (Anti anti anti!) Could these be causing the histamine-driven reflux?

“The list of histamine-raising meds in the book is long but not exhaustive, so I just typed the name of a medication into Google, followed by the word ‘histamine’, then looked at the first few references that appeared on reputable websites.  And it turns out that my meds COULD and WERE causing me problems.

“To get off the anti-inflammatory NSAIDs I used ice packs on my knee. I consulted a physiotherapist and followed the stretching and exercise regime he gave me to improve my back pain. And eventually I got off the NSAIDs. 🙂

“The final barrier was the benzodiazepines – Oxazepam Temazepam, ‘Pams’ by any other name or Xanax (I have used them all). Every night I looked forward to sinking into the relaxed bliss of those pills. But the bliss was counteracted by the reflux pain, and I was determined not to go back to taking those bone-breaking PPIs any more.

“So I went off benzodiazepines (gradually… that wasn’t easy either…).

“No more night-time acid reflux. And I’m sleeping well at last, and it’s all such an enormous relief that I actually feel HAPPY. Happy! Remember that?

“I am now staying ON the low-histamine diet and OFF the meds that were raising my histamine levels.

“These are the meds I no longer use, which all used to raise my histamine levels either instantly or as a rebound effect:

“I am now (after a long period of struggle) drug-free, less tired, almost pain free (I still have some back pain) and eczema free. If the skin on the OUTSIDE of my body has healed, surely the skin INSIDE is healing too? Meaning the digestive tract?

“I don’t want to be on  the low-histamine diet forever, but thank goodness it exists. And it is much easier to follow that some other diets I’ve resorted to, such as the candida diet! Nonetheless, I want to cheat on the low-histamine diet as much as I can if I can get away with it. ONLY if I can get away with it and not suffer! I do not want to pay the pain-price.  So here’s hoping that if I stay on the diet long enough i will properly heal on the inside and produce more DAO and then be able to eat and drink all those high histamine foods/drinks from time to time while still remaining healthy and pain-free.

“Without the book, I never would have known about the diet or the fact that my meds were sabotaging my health.

“My advice to anyone who thinks they might have histamine intolerance is this: go on the diet but make sure you check ALL your meds to make sure they are not sabotaging you. It’s REALLY worth it. “

The information provided on this website is intended only to aid you in making informed decisions about your health. It is not intended to be a substitute for advice and treatment prescribed by a registered dietitian, nutritionist or doctor. The content of this website may not be used as a basis or means for any form of self-diagnosis. If you suspect that you have a medical problem, we urge you to seek the help of a medical practitioner.