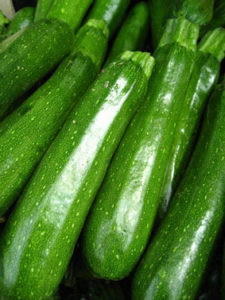 Enjoy zucchinis in a variety of dishes

Zucchinis, otherwise knows as courgettes, are considered to be a safe food for people with histamine intolerance. They can be incorporated into a huge variety of dishes, including:

Zucchinis are a type of summer squash. The zucchinis we see in the shops have been harvested while young. In Britain, Ireland and Australia, a fully grown zucchini is called a marrow.

Their botanical name is Cucurbita pepo, and they can be dark green, pale green, golden-orange, or striped. Everyone thinks of zucchinis as vegetables, but botanically speaking they are fruits – “…a type of botanical berry called a “pepo”, being the swollen ovary of the zucchini flower.” [Wikipedia]

A Brief History of Zucchinis

Like so many delicious food plants, zucchinis originated in South America. In the early 16th century the explorer Christopher Columbus brought seeds of zucchini’s cucurbit ancestors to the Mediterranean and Africa. However it was not until the second half of the 19th century that the zucchinis we know today were bred, in northern Italy. That’s why we tend to think of zucchinis as a “Mediterranean vegetable” – when they are really a South American fruit!

To make a rectangular zucchini-based pizza:

Preheat the oven to 350 °F (180 °C)
Chop zucchini into small chunks.
Place raw zucchini into a food processor and process 3 – 4 minutes until it becomes smooth and gloopy.
Add, flour, beaten egg, olive oil and parsley to the zucchini in food processor and mix until it forms a smooth dough. Add a little water if needed to achieve dough consistency.
Scoop out the dough onto a baking sheet (baking tray) lined with parchment (baking paper). Pat it out into a pizza shape.
Allow dough to sit on the kitchen counter (benchtop) for 20 minutes before baking.
Slide baking sheet into the preheated oven and bake for 20 minutes.
Remove from oven and top with your favorite low histamine pizza toppings.
Return pizza to the oven, making sure to swivel the baking sheet 180 degrees (to allow for even cooking).
Bake for another 15 minutes or until the edges turn golden brown.
Take it out of the oven and slice into rectangular pieces.