Many people with Histamine Intolerance suffer from itching skin. The Strictly Low Histamine Diet, combined with its suggested supplements, will help them enormously. In cases of severely itching skin, there are a few tricks to really gain control over the problem.

*  Freeze any leftover meats or foods containing eggs, rather than merely refrigerating them. Histamine only stops forming at temperatures below freezing – in the normal temperature of a refrigerator it continues to develop.

* Some people find that avoiding egg whites can improve their symptoms and relieve itching skin. Egg whites – particularly uncooked egg whites – contain histamine liberators. You can still eat eggs (pastured eggs of course!) but eat the yolks only, and bake with the yolks instead of the whole egg.

* Be aware of the ingredients of any substance that has contact with your skin. Avoid using soap, which can be an irritant. There are many soap-free cleaners commercially available. Avoid commercial skin products and shampoos containing irritant chemicals such as perfumes and colourants.

In the next post we will be giving you some recipes for home-made soap-free skin cleansers, so make sure you check back later! 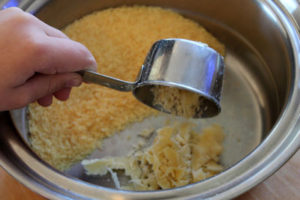 If you’re histamine intolerant, one of your symptoms could be an itchy scalp.  Commercial hair products may contain ingredients such as fragrances, which can irritate sensitive skin and make itchy scalps worse. So why not make your own fragrance-free, natural hair conditioner? It’s actually a lot of fun.

This recipe comes courtesy of www.easy-aromatherapy-recipes.com. To make the hair conditioner you will need a ‘carrier oil’ to suit your hair type. If you find that this formula makes your hair feel greasy, then use grapeseed oil as your carrier oil and reduce the amount. Note: Avocado oil should only make up to 10% of your total oil hair care blend because it leaves a waxy residue that’s very hard to wash out.