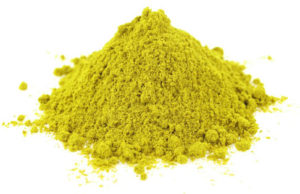 Asafoetida – have you ever heard of it? We discussed it briefly in one of our earlier posts (July 2016) but perhaps it deserves a post of its own. It’s a powder made from the dried parts of a plant in the Ferula genus, which  also includes the herb fennel.  Ferula assa-foetida is the scientific name of this spice. Asafoetida is part of the larger botanical “Carrot, Celery or Parsley Family”.

This spice has many names in many languages. This, in itself, indicates how well-loved it is across the world. It’s known as A Wei, Asafétida, Ase Fétide, Assant, Crotte du Diable, Devil’s Dung, Férule, Férule Persique, Food of the Gods, Fum, Giant Fennel, Heeng, and Hing.

You may ask, why do its names range from the scrumptious-sounding “Food of the Gods” to the off-putting “Devil’s Dung?” Asafoetida is truly delicious, but like garlic, it can (in certain circumstances) smell overpowering to some people. Don’t let this deter you!

This pale yellow powder is a valuable addition to a low histamine diet. It is thought to possesses anti-inflammatory, antihistamine and anti-viral properties, and to be able to combat intestinal parasites. Some studies have found that certain substances in asafoetida could help treat irritable bowel syndrome (IBS), and may help protect against high levels of cholesterol and triglycerides in the blood.

In particular, asafoetida is a boon to people who suffer from fructose intolerance. It is an excellent low-FODMAP substitute for onions and garlic.

You can use it in any savory recipe, especially any that call for onions or garlic. It blends well with stews, soups, risottos and casseroles.

You might be able to find asafoetida in the specialty or health food section of your local supermarket. If not, try a health food store.