Recipe of the month: OCTOBER 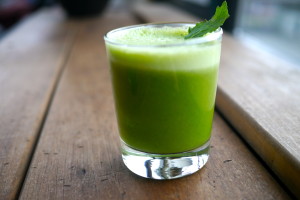 In one of our blog posts we highlighted the diamine oxidase properties of dark-grown pea sprouts. Here are some ways to use those DAO-packed sprouts in delicious raw smoothies.

Put all ingredients together your blender and blend at highest speed until the mixture is smooth.

Some people believe that if you suffer from histamine intolerance you should go gluten free.

The truth is, gluten is only a problem for people who are non-celiac gluten sensitive (NCGS), or who have celiac disease – that is, approximately 1% of the population. (Note: NCGS is a condition that is distinct from celiac disease.)

Foods that happen to contain gluten may also be a problem for people who are sensitive to those particular foods. For example, you may not be celiac or NCGS, but you might have been diagnosed as being sensitive to wheat, for reasons other than its gluten content. People with histamine intolerance should avoid wheat germ, in any case.

If you have celiac disease or NCGS then it is vital to avoid gluten because it can cause intestinal permeability, which is also known as ‘leaky gut’. This can in turn lead to DAO insufficiency and thus to histamine intolerance. Gluten intolerance is also linked with autoimmune  diseases.

However if you are, like the vast majority of the population, perfectly capable of digesting gluten without any problems, gluten-containing foods are actually good for you. They are highly nutritious – packed with vitamins, minerals and beneficial fiber.

“Studies show that whole grain foods, as part of a healthy diet, may help lower risk of heart disease, type-2 diabetes, and some forms of cancer. A 2005 report from the American Dietetic Association warned that gluten free products tend to be low in a wide range of important nutrients, including B vitamins, calcium, iron, zinc, magnesium, and fiber. There’s also little point in eliminating just some gluten. For people who are sensitive, even trace amounts can cause damage to the small intestines. So an almost gluten-free diet isn’t going to help if you have a problem.” [Source: WebMD]

In a normal, healthy person gluten will not cause a leaky gut. And the odds are, you are one of the 99% who can digest gluten.

If you think you really might be celiac or have NCGS, ask your doctor for a test. The Celiac Disease Foundation states that there are several blood tests available that screen for celiac disease antibodies. “If test results suggest celiac disease, your physician will recommend a biopsy of your small intestine to confirm the diagnosis.”

Even if your celiac test comes up negative, you could try avoiding all gluten for at least 30 days to see if that makes your health improve. If you do feel better, this might indicate that you have NCGS.

If you really are gluten intolerant you’d have to cut out all gluten, down to the tiniest particle. An ‘almost-gluten-free’ diet will not help at all.

Simply avoiding gluten because you think it’s ‘bad’ for you means cutting a lot of nutritious foods from your diet. You can, of course, do so if you wish, but-

If you find that taking certain antihistamines significantly improves your health, then it’s likely you suffer from HIT (Histamine Intolerance). Some common antihistamine trade names include:

Both of these – like any medications – can have unwanted side effects. However, these are generally outweighed by their benefits, at least in the short term. Taking them is a good way to hit your symptoms hard and really get them to settle down. If you wish to follow up the potential side-effects of Zyrtec and Zantac, click on these links: Zantac   Zyrtec

That said, taking Zantac and Zyrtec is not a long-term solution. It’s like putting a bandage over an infected wound – it looks okay from the outside but the problem remains. Besides, over time the body can develop resistance to the meds. Then they gradually lose their efficacy and you go back to ‘square one’.

About Boosting Your DAO

We suggest that HIT sufferers:

Pea Sprouts to boost your DAO

Numerous people have written in asking for more information on natural sources of diamine oxidase (DAO), so we’ve brought forward this post. (The promised recipes for home-made pH balanced shampoos will appear in the following post.)

When our diamine oxidase enzyme levels are low we can suffer from histamine intolerance. A number of legumes contain especially high levels of DAO. According to Dr Janice Joneja, eating these legumes as sprouts can provide us with a natural diamine oxidase boost.

NOTE: It is fine to take DAO by mouth to relieve symptoms in the short-term, but what you should be aiming for is to heal the gut so that you will not need to be taking DAO supplements.  It is wiser to heal your body to the extent that it can manufacture its own DAO, rather than depending on outside sources. The only way to achieve this is by following a Strictly Low Histamine diet for long enough to allow the healing process to take place. This  healing period varies from person to person, and takes longer with severe cases of histamine intolerance. Taking oral DAO supplements is like putting a bandage over a festering wound. It will not fix the problem, merely temporarily mask it.

The new seedlings of all legumes can provide us with DAO, but green pea sprouts are the best sources.  Lentils and chickpeas are also good.

DAO is high in legume seedlings because the diamine oxidase helps the plant to build its structural components, such as its stem, when the baby plant is forming. Diamine oxidase begins to be produced about three days into the development of the seedlings. It increases to its maximum at about 10 days, after which it decreases because the plant no longer requires it.

When seeking DAO from natural sources we need to obtain the highest concentrations possible, because the process of digestion itself can destroy the DAO before it works its magic on our histamine levels.
Histamine intolerance specialist Dr Janice Joneja says: ‘The research indicates that up to 4% of the total protein content of the seedlings can be diamine oxidase. Being a protein, it’s also subject to digestion and then of course the diamine oxidase itself will be broken down in the process of protein digestion, so it’s a matter of seeing how much can be absorbed and how much of it is still active. But it is still absorbed in the small intestine, so it doesn’t have the entire length of the digestive tract to be exposed to digestive enzymes.’

To increase the levels of DAO in your home-sprouted legumes, grow them in darkness. Sprouts that are grown in the dark have a higher level of diamine oxidase. Diamine oxidase is a protective enzyme for both humans and plants. Thus, when plants experience stress, they produce more of it.  When seeds grow in the dark they have to struggle. This struggle produces a much higher level of diamine oxidase. Dark-sprouted pea shoots will appear lank and pale (‘etiolated’. They may not look as vibrant and healthy as green sprouts, but their content of  diamine oxidase will be approximately five times higher than the content of bright green seedlings grown in sunlight. They are therefore better for people with Histamine Intolerance.

You can buy pea sprouts that have been commercially grown and bagged. Eating them may be somewhat beneficial to your health, but they have the following disadvantages:

Store-bought pea sprout powder can also be used. It is difficult, however, to estimate exactly how much DAO it contains, which means we cannot know what dosage to take on a daily basis for optimum benefit. Dr Joneja recommends mixing a cupful a day with water and taking that, to see if you get any benefit.

How to Grow Pea Sprouts/Seedlings

Obtain peas that are intended for eating, not for planting. Pea seeds that are sold for planting in gardens may have been dusted with chemicals to inhibit mold or to kill insects. Choose fresh green peas from your greengrocer or dried peas from the grocery section of your supermarket. Do not select dried peas that are salted, frozen, split or processed in any way. Try to find organic peas. Freeze dried peas are fine. (Shop online for them here.)

Note: Sprouts that start to look rather brown in color should be discarded because they are past their use-by date. Over-aged sprouts may also release a yellowish liquid in their container.

How to use Pea Sprouts/Seedlings

Use your pea sprouts in smoothies, rather than eating them in their unprocessed form. Diamine oxidase enzymes exist to help the plant build the wall of its cells, so they are attached to those cell walls.
Your normal chewing and digestion will not readily break those bonds. By whizzing the sprouts in a blender you will make the DAO  more readily available for your body to absorb. Do not put the juice through a strainer – it’s vital to consume the whole plant, cell walls, fiber and all. See our recipes here.
We recommend taking one cup every day.

Other natural Sources of DAO

Another natural source of diamine oxidase is kidneys. Make sure you buy fresh ones and cook them as soon as possible, or freeze them to stop histamine from developing.